The CEO of Recolight – Nigel Harvey – was arrested as part of the Extinction Rebellion protests. Wiser Environment would like to commend the passion and dedication of our business partner.

Extinction Rebellion is a worldwide environmental pressure group. They are urging the UK government to act during this climate and ecological emergency. Their demands are (i) for the Government to communicate the urgency for change, (ii) halt biodiversity loss and reduce greenhouse gas emissions to net-zero by 2025 and (iii) to empower the people through a Citizen’s Assembly.

Lets Recycle reports that the activist was arrested during Monday’s protests at Trafalgar Square, London. The Recolight CEO joined more than 320 Extinction Rebellion protesters who were arrested during the non-violent protest. 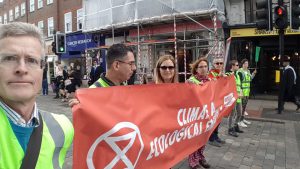 “All the normal channels for driving a response to climate change have failed, so we now need something more radical. I felt I had to make a stand.”

Visit Nigel’s Twitter and articles from The Lux Review and Lets Recycle to learn more about their activism and the call to action.