Prosper through compliance… Find out how our range of environmental consultancy services can help your business... download our brochure  Do you need to transition from OHSAS 18001 to ISO 45001?… Find out everything you need to know about ISO 45001  Are you affected by recent hazardous waste reclassification?… Find out about POPs in WEEE and who the legislation affects

Wiser’s Directors have reached their target of raising over £2,500 for the Fire Fighters Charity following last year’s Summer of Challenges, in response to the devastating fire at Wiser Recycling’s waste electrical and electronic equipment facility in 2016. We would like to thank the many who contributed for their generosity and support. 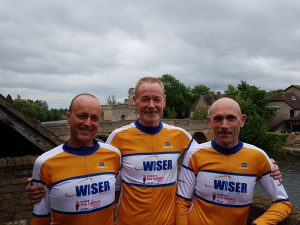 The ‘Summer of Challenges’ saw the Directors take on a series of gruelling races and trials kicking off with Russell and Dominic Hirst completing the 23 mile Three Peaks Fell Race in Yorkshire in April. The challenge took in 400km of road cycling and 25,000 feet of ascent in the Pyrenees in June where Russell and Dominic were joined by fellow director, Charles Thomas, and friend Alistair Whitehead. It also included the Yorkshireman half marathon and several sportive bike rides of over 100 miles before being completed in October in the Transylvanian Carpathian Mountains. Russell and Dominic Hirst were joined there by their brother Adam on a three day mountain bike tour covering a technical and physically demanding 110 km of off-road mountain trails and 3,500m of climbing in the National Park populated by brown bears, wolves and mountain goats.

Wiser experienced the amazing support of firefighters in 2016, and saw what they put themselves through, when their Cambridgeshire waste electrical and electronic equipment facility burnt down.

Russell Hirst, Group Managing Director says: “We wanted to find a way to show our appreciation and gratitude to the fire service for their amazing efforts to extinguish the fire which destroyed our facility. As a business, we have had a tough twelve months but are now in a position to forge ahead in 2018.”

The Fire Fighters Charity supports over 5,000 former and current fire and rescue personnel each year with services that include rehabilitation, nursing and family support.

Funds were also raised for the Cambridgeshire charity, Raptor Foundation, of which Russell is a Trustee, and which provides 24 hour care and rehabilitation for injured raptors, helping to support these increasingly rare species.

Last week, the Department for Environment, Food and Rural Affairs (DEFRA) opened a consultation into proposals to tackle waste crime in England and Wales, blaming criminal activity and poor performance in the waste industry for undermining efforts to improve resource efficiency.

DEFRA is consulting on proposals to give the regulators, EA and Natural Resource Wales greater assessment and enforcement power, give local authorities the power to hand out fixed penalty notices for household fly-tipping and to reform the exemptions regime within waste permitting.

The consultation document gives the estimated cost of waste crime in 2015 as at least £604million to the English economy and £15million to the Welsh economy.

The consultation closes on 15th March. Responses can be given here.

According to our analysis of the EA’s fee increase proposals, the basic subsistence fee for an IED permitted anaerobic digestion (AD) facility (operating as a reasonable operator in band B) will increase by over 170% from £4,029 to £11,019 from 1st April 2018, if proposed changes to the charging scheme are applied following the current consultation.

The calculations are based on the figures given in the Environment Agency’s Standard Review of Charges (SRoC), the consultation for which is due to close on 26th January 2018.

Our assessment considers an organic waste recycling operator, operating an AD plant under a bespoke IED permit as above.  Wiser Environment’s calculations for reasonable EA input for an ‘average site’ (based on a single person) include quarterly site inspections (4 at 3.5 hours each), annual compliance audit (37.5 hours), an annual OPRA review (1 hour) and an annual data review (1 hour), however this may vary depending on local priorities and perceived risks. The expected cost is in the region of £6,000 based on the EA’s proposed new rate of £115 per hour.

If a site is operating in compliance band E i.e. is considered by the EA to be a poor operator, a 150% multiplier would be applied bringing the basic subsistence fee to over £16,500. The appropriate compliance band multiplier (based on your Operator Performance Risk Assessment (OPRA) profile) would be applied at the end of the year to calculate the proposed subsistence fee for the following year.

The EA can also apply ‘time and materials’ following any future category 1/2 incidents or potentially once your basic subsistence fee has been spent regulating your site. Please note that if multiple Regulatory Officers are required to attend, then, their time is likely to be charged individually and include travel time.

Do you think this is a fair price for organic waste recycling operators? Have your say before 26th January at the EA consultation website.