Prosper through compliance… Find out how our range of environmental consultancy services can help your business... download our brochure  Do you need to transition from OHSAS 18001 to ISO 45001?… Find out everything you need to know about ISO 45001  Are you affected by recent hazardous waste reclassification?… Find out about POPs in WEEE and who the legislation affects  COVID-19… An update from the Wiser Group

These Plans supported Environmental Permit applications for a Waste Transfer operation in Yorkshire and a WEEE treatment site in Northamptonshire. The WEEE treatment site, in particular, required extended discussion with the EA, the Fire Service and Anglian Water as the site deviated from the latest version of the FPP Guidance in several aspects.

Wiser continues to have a 100% success rate in getting FPPs approved and understands the complexities of the EAs approach to these documents. If you wish to discuss FPP please contact us on 01480 462 232.

Wiser Recycling has won a Green Apple Award for Environmental Best Practice 2016 in the Green Organisation’s annual campaign to find the greenest companies, councils and communities. 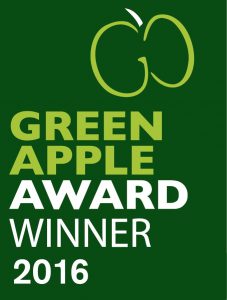 Competing against over 500 nominations, our sister company won the award for their innovative approach and investment in process equipment for small electrical appliances, which broadened their capabilities in WEEE treatment.

Wiser Recycling was presented with a trophy and certificate at a ceremony in the Houses of Parliament, London on Friday.

The Green Apple Awards began in 1994 and have become established as the country’s major recognition for environmental endeavour among companies, councils, communities and countries. The awards are organised by The Green Organisation, an international, independent, non-political, non-profit environment group dedicated to recognising, rewarding and promoting environmental best practice around the world.

Russell Hirst, Managing Director says: “We are delighted to have won this award and be recognised for our forward-thinking approach to innovation and sustainable development.”

This award win comes on the back of Wiser Recycling being a finalist in the MRW Awards for Excellence earlier this year.

The Environment Agency has recently issued new guidance on how operations involving the deposit of inert materials on land are classified. This update follows the outcome of a court case involving Tarmac at the end of 2015 at which the currency of EAs previous guidance, RGN 13 Defining waste recovery – permanent deposit of waste on land was called into question.

The new Waste Recovery Guidance updates the EA’s positon in line with this judgement and has potentially significantly implications for the restoration of quarries and other sites using inert waste to complete landscaping or noise bunds. Although it is yet to be seen how the guidance will work in practice it would appear that many quarry restorations will now be done via a recovery permit rather than potentially a landfill (deposit) one.